I recently published a post detailing the lows people will stoop to while trying to convert the general public to their cult-I mean, cause. In it I focused on the trend of putting activist literature into the bags of hapless children, who are out trick or treating. I mentioned the phrase activists like to use, called “planting the seed”. By which they mean to get people to think about their cause. Whether that means targeting children with propaganda (ie candy with stickers or pamphlets attached) or pissing off everyone in your community with over the top protests or posting blatantly offensive signs in your yard…Like the ones Hollie Redinger posted.

She caught a lot of shit from a few people on her page about handing out intactivist propaganda with the Halloween goodies, but when she posted the pictures of her signs? Well… The term “shit storm” doesn’t even begin to cover the hurricane of excrement that took place, as many anti-RICers and even some intactivists swarmed in a nearly 450+(and still going) comment frenzy to air their displeasure. The main grievance being the ethics of targeting children on this lighthearted holiday. They even compared her zealotry to that of the Westboro Baptist Church, and other religious fundies for taking a page from their book of proselytizing. 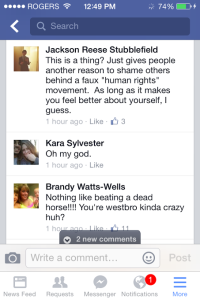 “But this is DIFFERENT because… intactivism!” Spoiler alert: hardcore intactivists use just as much emotionally manipulative, factually incorrect information as pro lifers do, yet they think they’re justified in their campaigns of harassment..Just like other people we know who claim to be “saving babies”. So no, you’re not any different. 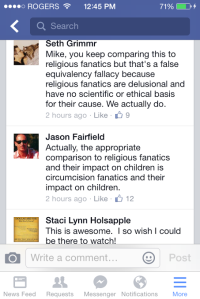 Holly, of course, LOVES the attention. It makes her a martyr in her eyes, and in the eyes of her equally delusional close knit groupies. She even goes so far as to compare her cause to fighting slavery. I wish I was kidding. Also, calling the people you wish to convert “Stoopid”? How mature and educational. You sure convinced me. 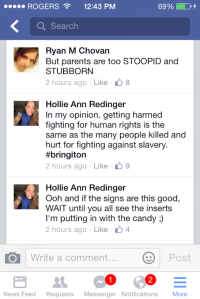 One person even made a call to police.

She isn’t even handing out candy, which I have to say is a travesty in and of itself. At least its not a bag of pennies, I guess.

This isn’t about intactivism anymore, it’s about her fucking ego. She even had the cheek to post this picture on her timeline after her thread blew up.

She certainly “planted the seed”, alright… Only its not the one she had in mind. By exposing herself as the unstable, obsessed, unethical asshole she is, she has successfully created a solid division in those who follow intactivism. On the one side, you have the people who are saying “you are hurting the cause. Stop.” and the others like Hollie who are saying “do whatever it takes” even to their detriment. Perhaps the seed that’s been planted is the one that will blossom into some members realizing that they will not follow a cause that has unethical lunatics like Hollie dictating to and representing them. Maybe it’s the seed that makes them wonder if what THEY are personally preaching is actually correct, and not simply repeating the the same old garbage taught to them by someone who lacks integrity. This entire blog is composed of examples of intactivists and their leaders not only admitting to doing things like lying and making numerous fake accounts to convince others, but who laugh about it, incredulous, that anyone would actually listen to them. This is what people think when they hear the term “intactivism”. This is who they see. That should frighten all of you self proclaimed intactivists out there.

Ahhhh Halloween! That special time of year when children dress up as their favourite superheroes, cartoon characters, ghouls and goblins and then embark on a door-to-door journey to gather candy. Sure, adults and teens use it as a convenient excuse to dress up, party and binge drink, but kids tend to be the main revellers with their sugar filled goodie bags and the excitement of getting to stay up late.
Despite Halloween being about costumes, candy and the veil lifting between the living and the spirit worlds, there exists a special breed of asshole that also emerges this wonderful time of year.
I’m not talking about the people who give out mini toothpastes, raisins or those gross molasses candies (seriously. People actually like those?!). Nor am I referring to the people who don’t turn off their porch light or put up a sign indicating they’re not participating in giving out candy, and then react rudely when people ring their bell. No, I’m talking about those assholes who slip bible verses, pro life pamphlets or other political propaganda into young children’s loot bags.
This is nothing new, of course. Growing up, it seemed like every town had that one house that parents and their trick or treaters would skip past. Thanks to social media today though, a lot more attention has been brought around these proselytizing idiots who use Halloween to push their cause du jour.
What was once mainly the domain of relgious fundamentalists, handing out propaganda has been adopted by everyone from anti-vaxxers to PETA activists. And now, intactivists are getting in on it, too. You know, because it works so 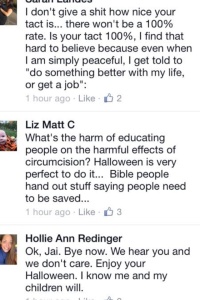 Yes, much like how anti-choice protestors think they are “counselling” the women they scream at, harass, shame and bombard with blatantly false information, intactivists are “educating” young children and their parents by handing out “information”. Said information procured, no doubt, from biased intactivist websites that cite no credible studies, facts or resources. Not that hardcore intactivists like Hollie Redinger are concerned with facts, mind you, but who needs facts when you have hysteria and hyperbole? Loling forever at 50% of your penis missing.. 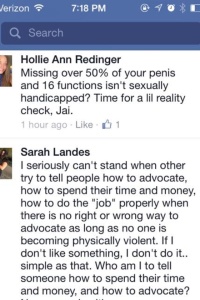 Speaking of Hollie, it seems as though her idea to use a much loved holiday to push her cause onto young children has caused a stir on her page. When one of her followers informed her (correctly) that people would get upset at her putting intactivist shit in kids bags, she threw a tantrum and flooded the thread with memes and berated the dissenter. Telling the poster she wasn’t a REAL activist (only a “hobby” intactivist) and then another follower accusing her of trying to tell her there was only one right way to be an intactivist (the hypocrisy is truly stunning). All because the poster didn’t think it was doing the cause any good to emulate rabid bible thumpers by handing out bullshit on Halloween.

The poster is right, though. Parents don’t appreciate strangers putting political garbage in their child’s treat bags. Let alone strangers putting pamphlets talking about penis, foreskin and sexual function in the bags of young children. This is grossly inappropriate, and the excuse that it’s “for the parents” doesn’t fly. That’s bullshit. Intactivists push the importance of targeting young people and “planting the seed.” 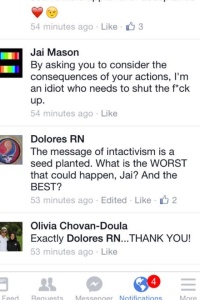 They target kids in particular like most fundamentalist fucksticks do, because kids don’t have the means to think critically about these issues and often believe most anything adults tell them. As opposed to adults, who ask for evidence backing up your claims. Gee whiz. Sounds kind of exploitive, manipulative and cowardly when you put it that way. Adults are about as likely to take your stickers and pamphlets on circumcision as seriously as they would pro life junk mail. Which is to say they won’t, and suddenly you wake up to a well deserved egged house. You’re not going to convince anyone, even if some people agree with the sentiment I guarantee they still don’t appreciate activists using Halloween as a platform. So if you think putting stickers on candy, 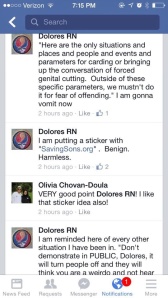 posting inflammatory signs aimed at children in your yard, 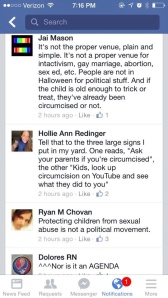 or doxxing/harassing people on the streets or internet

will change the hearts and minds of your target audience, then you’re as delusional as those people who think doing the same shit will lead others to God.
So hand out the goddamned candy, and for just one day keep the political bullshit to yourself. Don’t be a Halloweenie.

2 Comments   |  tags: anti-Halloween, anti-intactivism, Argument, bullying, circumcision, circumcision benefits, Circumcision controversies, Halloween, halloween assholes, Human rights, intactivism, Intactivists Are Weird, intactocopping, Men's Health, no sense, Parents Rights, saving our sons, seriously?, tired of this, who does this?, Why Do Intactivists Do That | posted in The Case Against Intacitvism